The Midlands After Brexit

It’s hard to argue that these trade consequences are still Brexit “teething problems” rather than long-lasting, structural changes.

It’s hard to argue that these trade consequences are still Brexit “teething problems” rather than long-lasting, structural changes.

Trade figures recently released for the first quarter of 2021 (1Q2021) provide worrying clues as to the impact of both COVID-19 and Brexit on the Midlands economy. One thing that is clear is that long-term planning has never been harder – previous economic trends have been blown out of the water by the  pandemic lockdowns, the uncertainty of the transition period, and the confusion of post-Brexit trading.

The Midlands generates around £239 billion annually for the UK, making it an economy roughly the size of Denmark’s, and serves a population greater than Scotland, Wales and Northern Ireland combined. It also generates 22% of England’s exports – more than any other English region.
However, the West Midlands was the worst-hit region in the first Covid-19 wave, and in 2020 had the second fastest year on year decrease in exports of any UK region.
The East Midlands saw a huge 12.45% decline in economic output in 2020, with only the West Midlands (-13.58%) and Yorkshire & Humberside (-12.77%) being worse.

The number of exporting companies in the Midlands fell in 2020 compared to 2019. Not surprising perhaps given everything that’s going on, but is this a result of Brexit or of the COVID-19 pandemic?

Data for 2019 and 2020 were strongly impacted by the end of the transition period and coronavirus so 1Q2018 data provides a better comparison. We can therefore project the 1Q2021 exports from the Midlands by applying the national 13.9% fall in exports to the 1Q2018 data for the Midlands – see the shaded area in Figure 1. 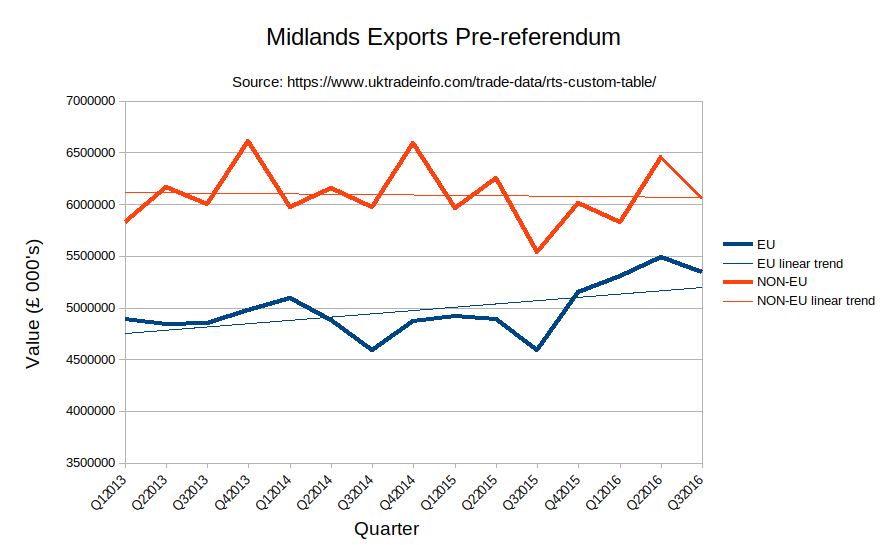 After the Brexit referendum the trend is seriously downwards for both EU and non-EU exports from the Midlands (Figure 3). 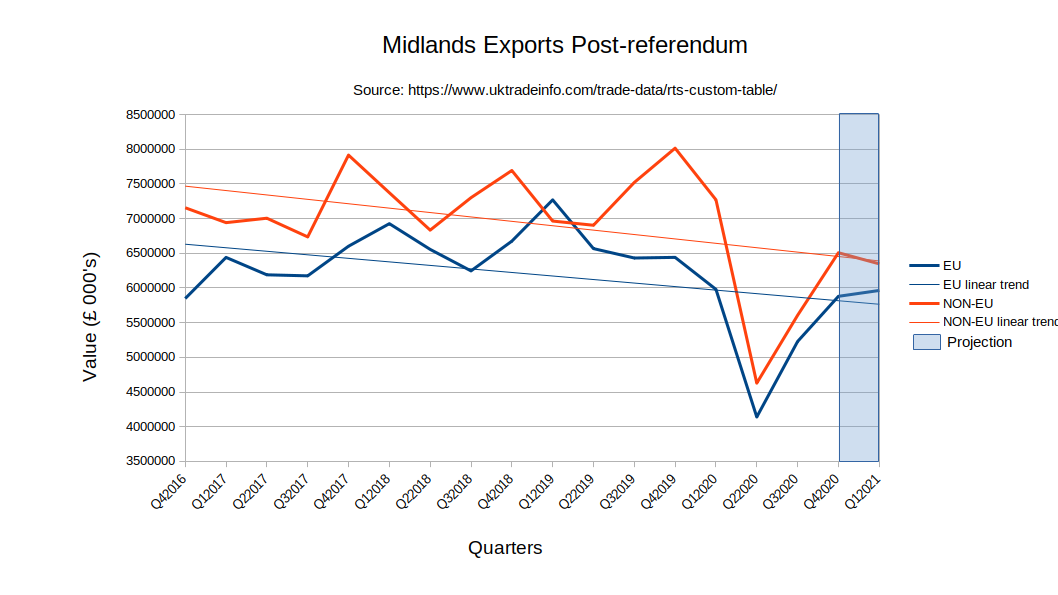 Is business confidence enough for the Midlands?

According to the latest Business Barometer from Lloyds Bank Commercial Banking, business confidence in the East Midlands rose by 20 points to 40 per cent, the biggest increase for more than three years, while in the East Midlands business confidence was at its highest since September 2015.
This confidence is based largely on the roll-back of COVID-19 restrictions so must be treated with caution – a surge of cases associated with the “Indian variant” for example, could soon derail this sense of business optimism.

Trade data for the Midlands provide confusing, mixed signals: high levels of business confidence while exports are trending downwards.
Separating the impact of the COVID-19 lockdown measures from the massive consequences of Brexit is close to impossible at this time. However, if the drop in exports was primarily COVID related we would expect to see exports to the EU and non-EU equally affected. Instead exports to the EU fell by around 11% (10.4%  in the West Midlands, 12% in the East Midlands) while non-EU exports only fell by less than 5%, indicating a profound Brexit impact.

It’s hard to argue that these trade consequences are still Brexit “teething problems” rather than long-lasting, structural changes, and business optimism driven by a lock-down easing feel-good factor is unlikely to be sufficient to counter these underlying structural changes.

Time will tell, but has it ever been more difficult for businesses in the Midlands to plan for the long-term?

Cliff Mitchell. Reproduced with the kind permission of Central Bylines
Share this article